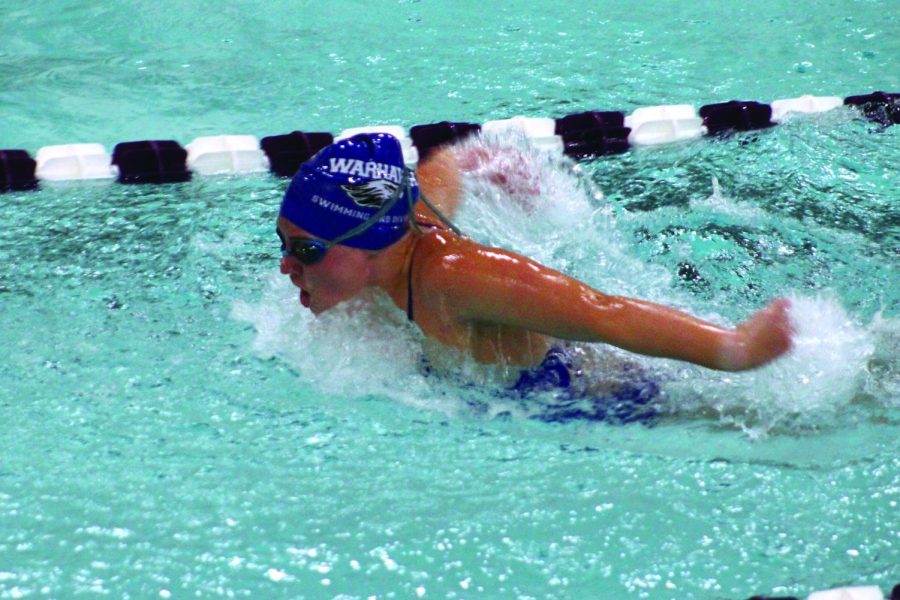 Senior Abby Thompson looks toward the end of her two hundred-yard butterfly event in Whitewater Jan. 22, 2022.

“The team performed well overall,” senior Tyler Popke said. “We won most of the events and put up some impressive times, considering we are coming off the two hardest weeks of training we’ve had the entire season.”

“Our team worked incredibly hard during our training in Florida (over winter break), and continued to do so last week,” said head coach, Elise Knoche. “We had some fatigued swimmers coming into this meet, but it was great to see how they pushed themselves through the sore and aching arms and legs, and just got up and raced.”

Saturday was Senior Day for the swim teams. The Warhawk men’s team had both of its seniors place first in their respective events, with Popke winning the 100-yard breaststroke and Zach Miller winning the 50-yard freestyle. The women’s team also had a senior finish with a win in her event, as Anna Yeazel won the 100-yard breaststroke with a time of 1:12.99, which was only .05 seconds faster than the second-place finisher Sarah McField of Lake Forest College. Overall, the teams won 16 of the 32 total events, composed of two team events and 14 individual events.

“With just two meets leading up to the WIAC Championships this semester, Saturday was one of the last chances for our swimmers to work on different race strategies or stroke, start and/or turn techniques,” Knoche said.

“One main thing we need to improve on is finishing on close races,” Popke said. “There were a few events where we could have placed slightly better if we just put our head down and finished strong.”

The next meet for both teams is scheduled for Saturday, Jan. 29 at 1 p.m. at the UW-Eau Claire in a dual meet versus the Blugolds.