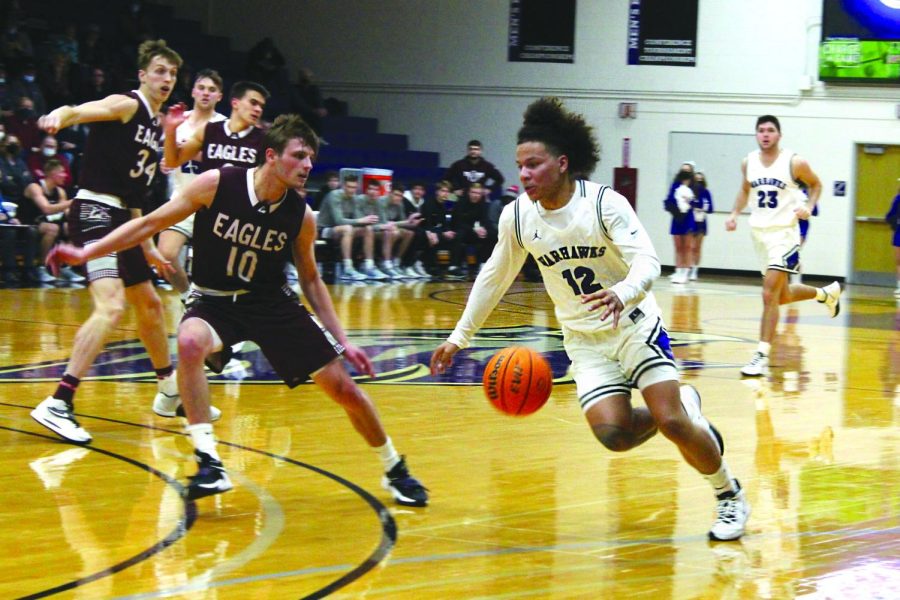 Freshman guard number 12 Jameer Barker cuts toward the basket in hopes to score a few more points for the team during their game against the University of Wisconsin - La Crosse in the Kachel Gymnasium on Jan 19., 2022.

The UW-Whitewater men’s basketball team (11-7, 4-3 WIAC) was toppled by the No. 10 UW-La Crosse (15-2, 6-2 WIAC) team on Wednesday Jan. 19, losing by a score of 79-61 in Kachel Gymnasium. The Warhawks started the scoring and were sticking with their nationally ranked opponent however halfway through the first half the Eagles found their groove.

For the first eight minutes of the game it looked as though the Warhawks were well within reach of pulling off another major upset over a nationally ranked WIAC opponent. From there, La Crosse flipped the switch. The Eagles finished the game shooting 49% from the field and 14 offensive rebounds, compared to Whitewater’s 44% shooting and just eight offensive rebounds.

“That was obviously the big issue in the first half,” Warhawk head coach Pat Miller said. “We didn’t rebound, we didn’t box out. I just didn’t think we were very good in any phase. Offensively I thought we were impatient and we didn’t move the ball which is what we wanted to do coming into the game. They’re (La Crosse) a good defensive team.”

The Warhawk offense was smothered by the La Crosse defense. The team was held over 20 points below their average score per game and was blocked four times and had the ball stolen five times. After the half the teams played evenly, La Crosse led by 18 at the half and won the game by 18. Miller talked about trying to come back from such a large deficit.

“Being down at halftime as much as we were that first five minutes is critical to try to get back in it and under 10,” Miller said. “We were up 18 at Oshkosh and they came back and put it into overtime, so obviously it’s not something you can’t accomplish. Throughout this game we just made too many mistakes.”

“Good teams have a couple bad possessions and they reel it back together, and go okay we need a longer possession. We just haven’t been able to do that consistently. We have a tendency to, when things start to go get away from us a bit, they really get away,” Miller said.

Derek Gray, who had five rebounds, an assist and shot 8-19, scored 19 points, 14 of his points came in the second half alone. Unfortunately for the Warhawks his second half performance was not enough to spark the rest of the team into making a comeback.

The Warhawks suffered their second straight loss after having lost in River Falls against a low in the WIAC standings UW-River Falls team. Carter Capstran, who went 5-6 and scored 10 points, talked about the trust he has in coach Miller to get the team back into their winning ways.

“We’ve had some ups and downs in conference but I think coach Miller has got a plan. We’ll get right back to it right away in practice,” Capstran said. “We’ll work hard, we’ll work better together and we will be fine.”

Miller and Capstran both had high praise for the No.10  ranked La Crosse team who was led by guard Ethan Anderson who scored 23 points along with a steal and three rebounds. They mentioned how well the Eagles played together and was strong defensively. Miller compared the highly experienced La Crosse group to the very young team that Whitewater is playing with.

“Give them credit, I thought they played very well, and they shot the ball well from three. I thought they executed well, when we made mistakes they took advantage of us,” Miller said. “This team is young, I don’t know if they fully appreciate that. As of yet the better teams are, the more they’re going to take advantage of your breakdowns. Lesser teams, you can make mistakes, you can be out of position because they’re just not good enough to take advantage of you.”

The Warhawks played UW-Eau Claire in Whitewater on Saturday Jan. 22 and lost a third straight game by the score of 63-74. The team’s leading scorer, Derek Gray, did not play due to an injury sustained in practice. The Warhawks next home game is slated for Saturday Feb. 5, when they seek revenge over UW-River Falls. The Falcons handed Whitewater their first defeat in their losing streak.