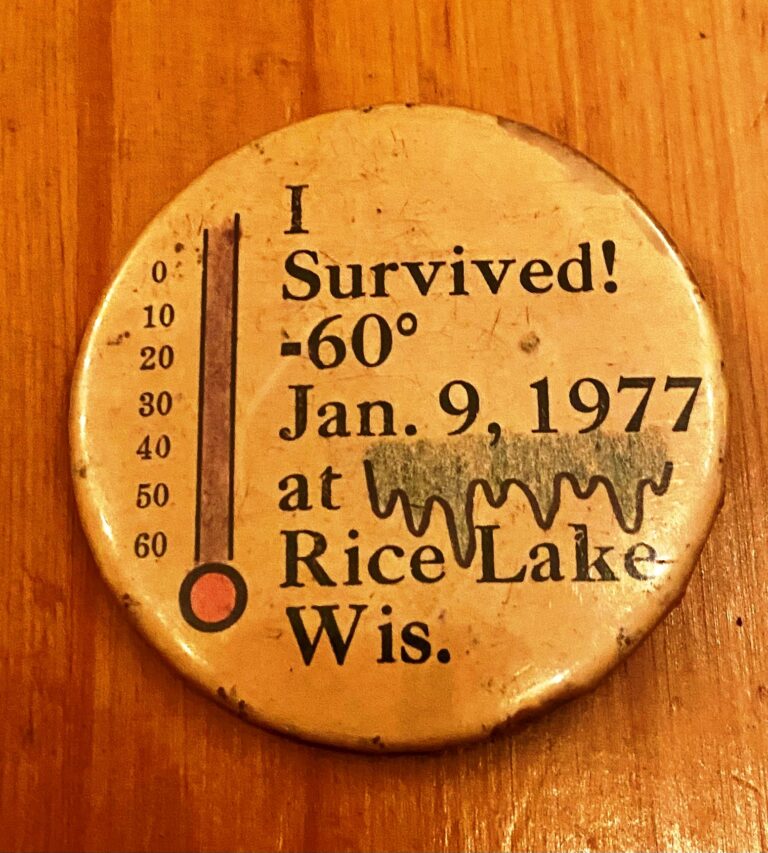 A button marking the historic cold on Jan. 9, 1977, in Rice Lake. (Photo courtesy of Jack Daniel)

Apparently, there’s nothing like a cold-weather story to warm up memories from folks in Wisconsin.

Last week, I posted a link on the Facebook group Forgotten Wisconsin to my recent column about Jan. 9, 1977, when the temperature unofficially dipped to minus-60 in Cameron near Rice Lake. That opened the frozen floodgates of cold-weather stories and some memories from that day.

As of this writing, there were 515 reactions, 87 comments and 154 shares of my post. Here are a few reactions (used with permission from the commenter).

“Let me tell you about that night. I drove 40 miles from Rice Lake to Ladysmith and the roads were E-M-P-T-Y — except for one idiot who was out there …  me. When I went over a bump or railroad tracks, the whole car rattled, like it was made of sheet metal.

“Every ‘brave Wisconsinite’ was cowering at home near their fireplaces. If it hadn’t been for the fact that I lived in Ladysmith but was engaged to a girl from Rice Lake, I wouldn’t have changed it. I never experienced anything like it and hope I never will again.”

Zientara today lives in his bride’s hometown of Rice Lake. He and his wife, Beverly, will mark their 45th anniversary in March.

Andrew Grzadzielewski of Stevens Point was a student at Melrose-Mindoro at the time and had traveled to Rice Lake for a chess tournament. Grzadzielewski made the trip with the school chess coach Lon Newman and his 1951 Studebaker.

“The heater did not work very well,” he said. “But we lived.”

On a personal note, I played chess with Andy a few times (he was two years ahead of me at the same school) and he was good.

Even others who weren’t in the Rice Lake area that day remember how cold it was.

Amy Vollmer Andrews of Wauwatosa can’t claim to remember Jan. 9, 1977, as she was about three weeks shy of being born. But her parents remember it well as they held a baby shower in their Fond du Lac home that day.

She said her grandparents and great-grandmother ended up having to spend the night as it was too cold to drive them home.

The weather also interfered with an important event for Ruby Barnum Eide, who got married the day before at the Jackson County Courthouse in Black River Falls.

“My wedding was much smaller than planned because only a few cars would start,” she said. “It (was) minus-52 at my house that morning.”

Others commented about other cold days they remember and questioned if the minus-60 included wind chill. It did not — that was actual temperature and did not include the wind chill.

Others wondered why the fuel oil furnaces stopped working.

Fuel oil that is not blended starts to gel at about 17 degrees. So, anyone with an outside fuel tank not blended for cold temperatures would have had problems. And many more folks in those days burned fuel oil.

The U.S. Energy Information Administration says 21% of U.S. households in 1977 used fuel oil for heating. That was down to 7.3% in 2009. Today, more than 85% of the heating oil sales are located in the Northeast.

No matter what your energy of choice was that day (it was wood for us), you had to burn plenty just to stay warm.