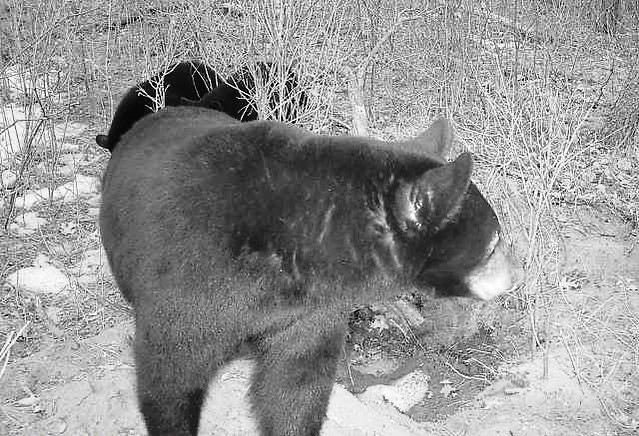 This bear sow and her two yearling cubs came out of hibernation near Black River Falls in good shape. (Photo courtesy of Bill Quakenbush.)

Even when the icy grip of winter keeps holding on, there are signs of spring around us.

One sure sign for me was when my animal waterer that froze at the end of January finally thawed. It’s a relief to not have to carry 5-gallon pails uphill 182 steps.

While the robins have been back for weeks, we’re still waiting for the crocuses and daffodils to push through the earth.

A sign of spring in the woods is the waking up of the bears.

Black bears have become a common sight in western Wisconsin over the past 20 years. It was a rare occurrence when I was young, but there’s a healthy population of bears that live in many areas of Wisconsin.

Black bears spend spring and summer bulking up, eating plants, grasses, berries, insects and whatever else they can scavenge. When the weather turns cold and the food supply is gone, they go to their winter dens and hibernate. Dens can be holes in the ground under an embankment or tree root, in shallow caves or under rock ledges.

Loren Salzwedel of rural Ettrick came across a bear den while deer hunting in late November with a bear lying in the entrance. He placed a trail camera near the den in the middle of February, and with the recent warm temperatures, he peeked down the valley at the den.

“What I saw last week was a big back clump laying outside the den,” Salzwedel said.

He returned a few days later to pull the video card from the camera with his son Kyle. Clearly mindful of the adage of not poking the bear, Salzwedel said they had a plan in place if things went sour, but the card was pulled without incident.

When they viewed the pictures, Salzwedel was amazed. The bear den was more like a bear motel. The reason one bear was sleeping near the entrance may have been a space issue. There were five bears that spent the winter there.

Salzwedel said the first bear peeked out of the den on Feb. 18 but didn’t come out until March 5. They were captured on the camera until March 17 when they moved on.

“Living in the country can be truly incredible at times,” Salzedel said.

During hibernation — during the coldest part of winter in January — females give birth. The mothers wake up to take care of the cubs, licking them clean, keeping them warm and nursing them. The cubs weigh 2 to 3 pounds after a month and can crawl, but still need to be kept warm and fed. By March the cubs are walking around and ready to brave the outside when the bears end hibernation.

Bears do go in and out of sleep over the winter, but they go the whole time without eating, drinking, urinating or defecating. Mothers ingest their cubs’ urine and feces and may eat a little snow.

Even though a bear may lose up to 30% of its body mass over the winter, its muscle mass and bones remain strong. Bears have the remarkable ability to recycle their own water, avoiding dehydration and kidney failure. They can also extract the nitrogen in urea to keep muscle and organ mass.

Another hibernator emerging to face spring was captured on a camera by Bill Quackenbush of Black River Falls, the Tribal Historic Preservation Officer at Ho-Chunk Nation. A sow he called Buffy and her two yearlings came out of their den near Millston in good shape. The yearlings will hang out with their mother until this fall, when they will be on their own. Bears give birth every other year.

Quackenbush said the bears hang out near their home.

“They are off checking out everyone’s feeders and old deer carcasses and such now, I am sure,” he said. “They stay busy now with stump-pulling and grub hunting until other food becomes available.”

Spring has sprung. Bears are awake and looking for food.

If only I could sleep most of the winter and wake up slimmer and trimmer.