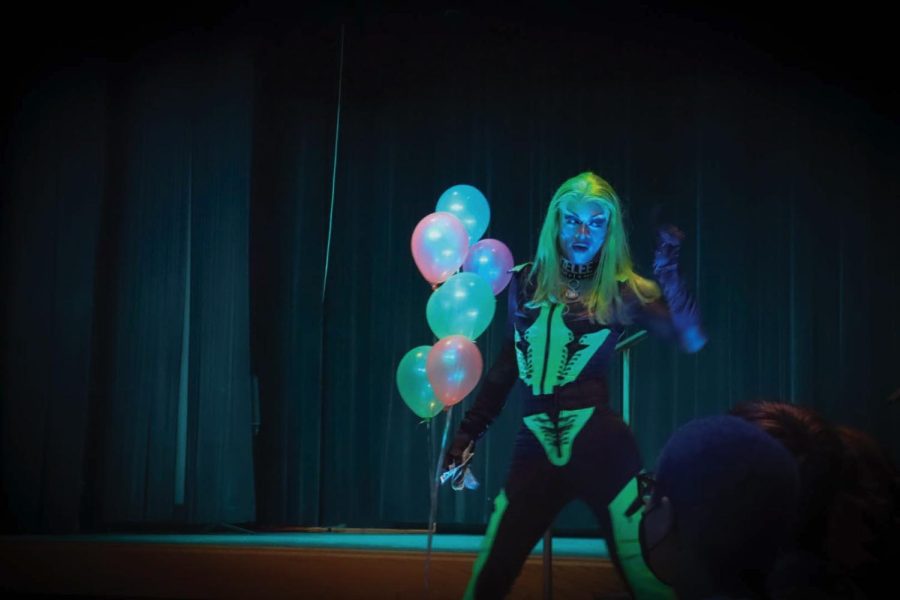 Melee McQueen an Asian American Drag artist flips their hair while they perform on stage during IMPACT’s 13th annual Drag Show the first time in person since the pandemic Thursday night April 7, 2022.

It has been three very long years of virtual performances and zero in person pleasantries. However, the drag queens have come back and are more bold and beautiful than ever before! That’s right. The LGBTQ+ and allies student organization IMPACT hosted its 13th annual drag show fundraiser in person this year on the evening of April 7 inside the University Center’s Hamilton Room.

With a theme of “The Gay 80’s” there were a variety of students who came dressed to the nines in their most fabulous 80’s attire such as spiked hair, neon colors and punk type combat boots. There were some who even came in wearing floor length gowns, a common sight to see in the audience of any drag show. Free glow sticks were provided for students to wear during the performance. The glowing faces of the students before, during and after the performance showed just how exhilarating the entire event had been.

“I’m really excited about the energy and to check out everyone’s outfits, as well as the music. Just to have a good time,” said senior elementary education major Gabriella Torres. “I try to go to events like these as often as I can as I live off campus.  I am just excited to be at this one for the very first time in a very long time. I would absolutely go to another event like this.”

There were a variety of drag queens and kings who took the stage that night in an array of fantabulous outfits and costumes that matched the 80’s theme. The host of the night was Bryanna Banx$ who not only kept the crowd entertained with her hilarious commentary and bigger than life attitude but also with her two delightful dance performances of the night. There were a total of eight performers including the host. Two drag queens are current UW-Whitewater students, known as Phelonee and Victorya Attwood. The other four performers, Melee, Malaiya Marvel, Jasper Madison, Ponyboy and ZZ Topz traveled from areas such as Madison and beyond to give the UW-W students a show that they did not disappoint after such a long break from these social gatherings.

“I came out today because I got invited by a close friend. We all had been to a brunch last year and wanted to just hang out again, get together and celebrate. I don’t go to these events that often. I actually live off campus, but I’m glad I heard of this one. I am excited to be a part of everyone’s energy. I like being in places where everyone is celebrating and happy. It lifts my spirits,” said senior public relations and marketing major Lexington Garcia.

There were a variety of activities that went along with the show. For only a dollar students could enter a raffle for a chance to win one or more of five different baskets filled with goodies. Students who bought VIP tickets had side seating next to the stage, as well as getting the chance to hang out with the host Bryanna Banx$ after the show for a meet and greet. This also gave them the chance to meet another one of the performers Ponyboy for a drag workshop where students got to learn more about the queens and kings, as well as the art of drag itself. After the performance had ended there was also a free post-show DJ dance party with DJ Sarah Akawa. With over a hundred people showing up it is easy to say this drag show was a success. So successful in fact it was announced at the show that they had enough funding to have an even bigger and better drag show next year.

“We expected many people since the last time this show was in person the Hamilton Room was sold out. We knew going in that people may not really remember the drag show  because it had been three years, but we pushed a lot on social media. We sent out invites to people and I sent out emails to mass groups of people on campus. We were also selling tickets at the door so we knew there would be a lot of people tonight,” said IMPACT social coordinator Esther Jeninga.

All of the proceeds went to support LGBTQ+ students and their advocacy efforts. Events like these ensure not just a fun place but a safe space for all students who are both a part of and advocates of the LGBTQ+ community to come and enjoy an extremely colorful culture of dance, music and phenomenal drag style.