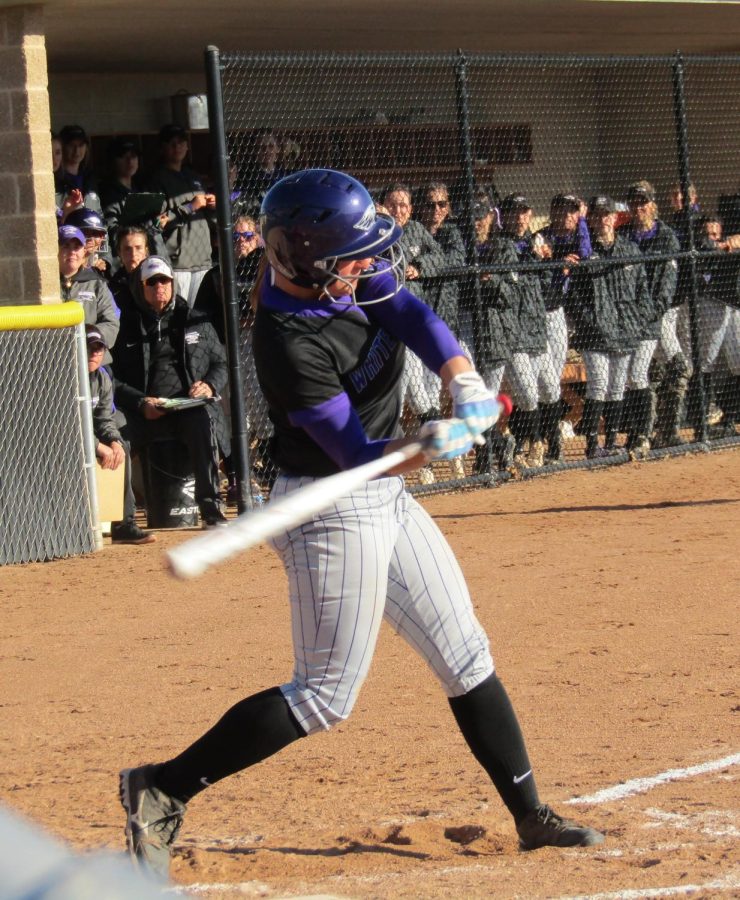 The UW-Whitewater softball team kicked off their conference slate with six games against WIAC opponents this week. Whitewater won three and lost three to keep their season record even at 10-10.

They started off the week in Platteville, WI on Wednesday Apr. 6 with a double header against the Pioneers. They split the series evenly at one game a piece, before the Warhawks headed back to Whitewater to take on UW-River Falls. Whitewater and River Falls faced off in a double header match up at Van Steenderen Complex in Whitewater on Saturday. The Warhawks lost both games in their Saturday double header, but bounced back on Sunday with a pair of shutout wins against the Blue Devils of UW-Stout.

In their Wednesday showdown with Platteville the Warhawks got off to a slow start and fell to the Pioneers 14-6 in game one. In game two Whitewater had a much better performance and recorded their first conference win with a 13-1 victory. Warhawk pitcher Kate Cleveland held Platteville to just three hits and one run, while she improved her record to 3-0 on the season. Whitewater tallied 14 hits from 11 different players in the matchup and were led by Kiarra Kostroski. Kostroski finished the game on three hits from four at bats and batted in four runs.

Following the double header against Platteville, Whitewater faced off against another conference opponent just a few days later. The Warhawks got off to another slow start and dropped game one to UW-River Falls 6-1. In game two the Warhawks fell behind 3-0 early and despite a pair of back to back solo home runs from Meghan Dunning and Brooke Mangler in the sixth inning, Whitewater was unable to complete their comeback attempt. The Warhawks left the tying and winning runs stranded in the seventh and lost 3-2, which completed the sweep from the Falcons.

After a couple of tough losses just a day early, Whitewater was desperate for a better performance against Stout on Sunday afternoon. In game one of the double header, Cleveland returned to the mound and shut down the Blue Devils lineup. Cleveland allowed just three hits and zero runs as she improved her record to 4-1. Whitewater cruised to an easy 2-0 victory with the help of a solo shot from Dunning.

After blasting two homers in as many games, Dunning opened the scoring in game two against Stout with her third home run of the weekend.

“I feel like I am starting to get back into things and now I know that I need to be watching certain pitches and that I should only be swinging at low stuff,” Dunning said.

Dunning was just one of three Warhawks who hit the ball out of the park in the second game against the Blue Devils. Kennedy Cox hit a two run homer in the second inning, and Brooke Mangler put one over the fence in the fourth. Mangler had a phenomenal outing with three hits in three at bats and three RBI.

“She has just been doing a great job, she is the true utility player,” head coach Brenda Volk said in response to Mangler’s performance. “She has really been hitting the ball well, I am happy for her, she is a great kid.”

On the defensive side, Rhiann Dick pitched the second complete game shutout of the day for the Warhawks, and sent Stout home without any Blue Devils crossing home plate.

The Warhawks experienced ups and downs as they got their first look of the season, but hope to be more consistent in their upcoming matchups. Whitewater takes on another conference opponent Friday, Apr. 15. The Titans of UW-Oshkosh will be coming to Van Steenderen Complex for a double header.