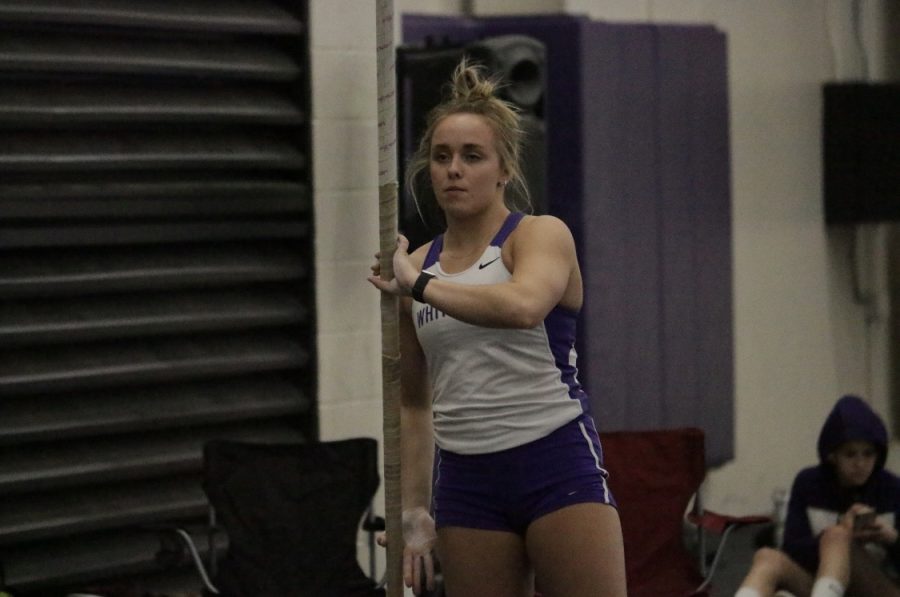 Gracie Holland has made a splash in her second season on the UW-Whitewater track and field team. Holland had an impressive indoor season as she broke the program’s indoor pole vaulting record for women and earned All-American honors with a fifth place finish at the NCAA Championships. Following her exceptional indoor season, Holland has gotten off to a successful start to the outdoor season as well. She is undefeated through the Warhawks’ first four outdoor meets and earned herself the program’s outdoor pole vault record with a height of 12 feet, 5.25 inches.

Q: What does it mean to you to be a part of such a successful Warhawk track program?

A: It pushes me everyday. I am motivated by the program’s success to want to be the best I can be and work hard day in and day out.

Q: How does it feel to have broken and now hold the program’s indoor and outdoor pole vaulting records?

A: I came in as a freshman and I did not really know how far I could take my athletic career, so this summer I really put in the work and I was able to accomplish the first indoor record and then I noticed the outdoor one was also within reach. It was fun to see that I could accomplish a goal like a school record, especially at the collegiate level, and it helped me realize how much my hard work has paid off. Now I am just hoping to raise the record higher and higher.

Q: What were your goals and expectations going into the indoor season and how did they compare to what you achieved at the end?

A: I did have the goal of getting close to the program record, but I was not sure if I was going to break it this year. My goal was to make it to nationals and I thought there might be a possibility of placing at nationals, but becoming an All-American was not a goal I had until the end so it was cool to see myself exceed my own expectations.

Q: What was the process of reaching nationals and placing fifth and earning All-American honors?

A: I went into nationals with the 12’ 8′ ‘ mark and I felt pretty good in my vaulting, so I knew I had the possibility to place and towards the end of the week my goal was to get onto the podium. I went out there and competed how I normally competed and I had the confidence that I deserved to be out there to compete and I was really happy with earning the All-American title. But it did make me want to work harder to earn the number one spot.

Q: What is the factor that contributes most to your success and motivation?

A: My teammates and my coaches. They push me everyday to work hard and be better, work towards my goals and actually believe in myself and have some confidence.

Holland will continue to exceed everyone’s expectations as she competes through the end of the outdoor track season. She hopes to stay undefeated and return to nationals for the opportunity to defend her title as an All-American and take a shot at a National Championship. The Warhawks have just one meet before the WIAC Championships and will then at the NCAA Championships. They will be held throughout the course of three days starting May 26 at Spire Institute in Geneva, OH.