Putting on a play 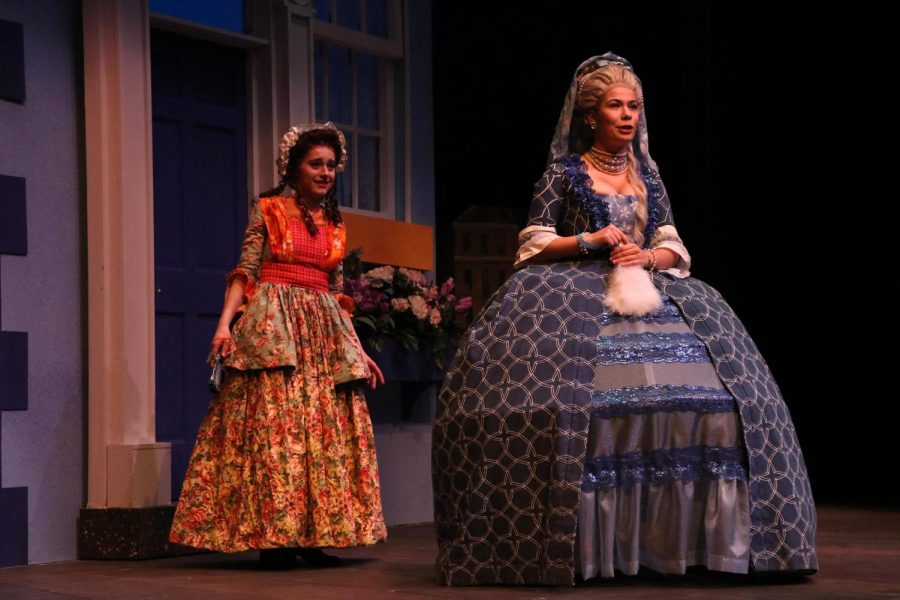 Makayla Fedler (right) and Valerie Gyorke perform in the Barnette Theater for the production of the Busybody.

Behind the scenes there are many other aspects to preparing a show than what the audience may see when attending. Long nights of learning not only the script, but the characters inside and out, as well as stunts and set changes all need to be perfected before it can be presented live.

The Busybody is a show that UW-W students put months of work into for learning lines, positions, cues and to mentally become one with their characters. Playing Miranda in the production, Makayla Fedler’s character is the ward to Sir Francis Gripe who plots to seize her estate from Francis by tricking him into thinking they will become married, although her motives are to actually wed Sir George behind his back. Keeping into consideration the deep characterization that came with playing Miranda, Fedler had to draw connections to understanding the drama of such an important issue for a young female centuries ago.

“Some of the things that an actor does to prepare for any show is to analyze every aspect of the script rather than just the role that you’re playing. It’s important to recognize the relationships between every character and especially in a period piece, which is what The Busybody is. You never want to say something you don’t understand. It could potentially change the entire meaning of the line based on delivery alone. Another thing I do personally to focus on the character is find some aspects that I can relate to that I have gone through that are somewhat like the character and myself,” said Fedler.

Similarly, Bryce Giammo who plays Charles, had to step outside of himself in order to test himself physically while in character. Performing the incredible stunt of jumping off of a balcony is an extremely daunting task on its own, and adding the pressure of portraying another person simultaneously made for a great challenge.

The outstanding effort made by these students left audiences astounded while also inspiring students to take on large roles in future productions.