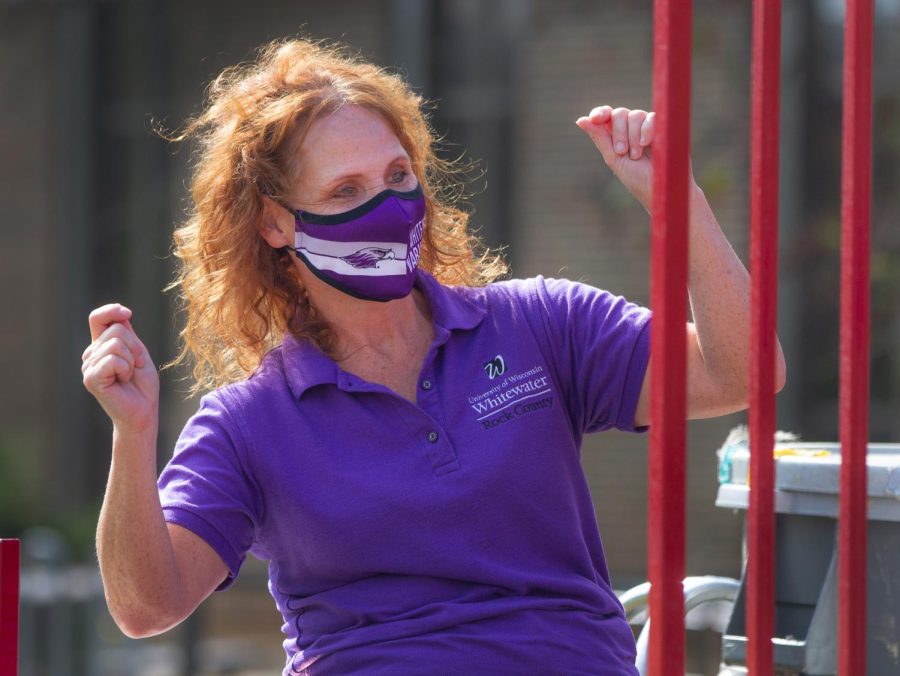 Tricia Clasen, interim dean of the College of Integrated Studies, moves to music even though a well-thrown pitch could plunge her into a ball pit at Fall Fest on the UW-Whitewater at Rock County campus on Wednesday, Oct. 6, 2021. (UW-Whitewater photo/Craig Schreiner)

Patricia Clasen has recently been named the Dean and Assistant Vice-Chancellor of UW-Whitewater at Rock County. Clasen was appointed to the position Monday, May 2 after serving as Rock County’s Interim Dean for two years.

“You won’t find a whole lot of people who love this campus more than I do. Having been here 20 years, I really believe in our mission. I believe that we can have a huge impact on students’ lives and the community we serve,” says Clasen. “For me, it’s an extension of that. I love being a professor here, but this is a chance to be a part of an ensuring future and hoping that I can play a role in the success of students to come.”

Clasen has been at UW-Rock County since 2002, when she served as a professor of communication and a chair in the College of Integrated Studies, among other positions. Her various roles allow her to bring a variety of experiences to her new appointment.

“There are so many interrelated parts to any college – any institution of higher ed,” says Clason. “The more you kind of know what other people are doing – the importance of everybody’s role – the more you can be successful in leading. I’ve always seen everything that happens as important, and part of knowing that is doing lots of different things over the years.”

Over the past few years, she led the campus through a system-wide restructuring of the former UW Colleges, as well as the COVID-19 pandemic, while successfully launching a Bachelor of Applied Arts and Sciences degree and creating new partnerships with technical colleges and businesses. An announcement sent out by UW-Whitewater highlights the impact Clasen has had on her campus.

The position of dean is responsible for leadership, faculty support and general operations at the Rock County campus and its College of Integrated Studies. The title of assistant vice chancellor was added this past fall, to emphasize the amount of community involvement Rock County participates in, as well as to look for partnerships with local businesses.

“I am thrilled that Dr. Clasen has agreed to serve in this role permanently. She continually demonstrates a commitment to serving the region and in particular the needs of current and future students. UW-Rock County has a bright future,” says UWW Interim Chancellor John Chenoweth.

Clasen originally received a B.S. in Speech Communication from UW-River Falls. She also holds an M.A. from Wichita State University and a Ph.D. in Communication Studies from the University of Nebraska-Lincoln.