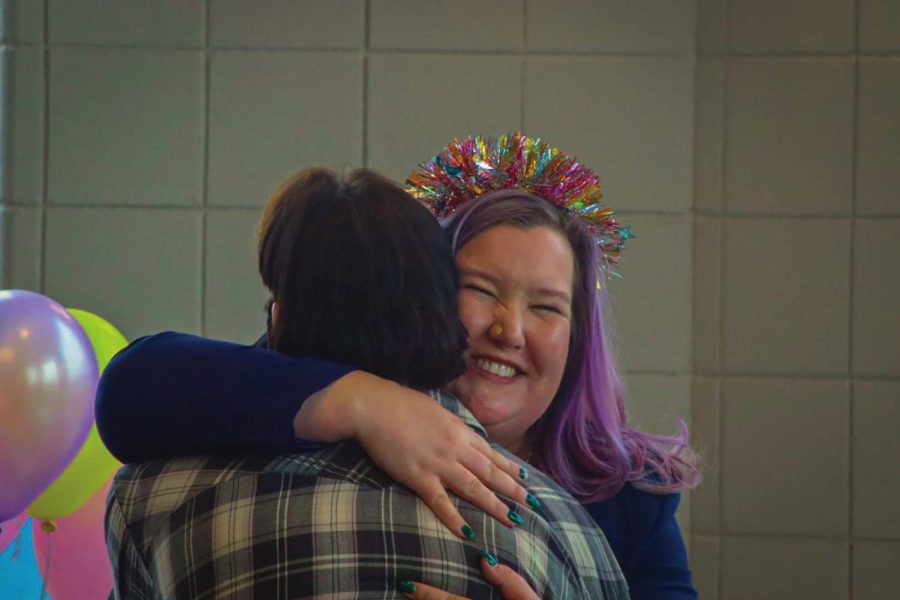 Professor of Women and Gender Studies Ashley Barnes-Gilbert (left) hugs and congratulates Miles Duckert, a senior who is taking a bachelor of science in social work(right) during the Rainbow Celebration of Excellence Thursday afternoon April 28, 2022.

Every year the PB Poorman Pride Center puts on a ceremony for all the LGBTQ+ students and allies who are graduating seniors to commemorate their time here at UW-Whitewater. This year celebrates the 11th consecutive year of the event and the first year back celebrating indoors since the pandemic hit. During this ceremony students, faculty, and staff can be awarded based on their advocacy, activism and achievements as they strive to make campus a more inclusive environment.

Graduating seniors Kali Anditon and Alex Koon, both members of the PB Pride Center and IMPACT reflected on their time here on campus. The Royal Purple asked them to comment on what it was like being a part of the LGBTQ+ community and about their future plans after graduation.

What has been your experience being a part of the Pride Center community on campus?

“I didn’t get involved with the Pride Center until this last year. Which is super strange for me, it feels like I’ve known these people my whole life. Being a part of this Pride Center has filled me with such immense joy that it is a little difficult to put it into words. I am more than happy that I accidentally got involved here through IMPACT and became a Pride Intern working on the magazine. That is probably one of the weirdest little butterfly effects that I will have the privilege of experiencing in my lifetime. I have known no more joy, kindness, and care than I have both working at and existing in the Pride Center. I have found love not only amongst friends, but for myself as well.”

“What are your plans after graduation?”

“In all honesty. I don’t really know. At the beginning of the year, I really thought that I would go into editing or something along those lines. More involved with journalism. But, if there is one thing that I have learned this year, it is that I am not entirely 100% happy with my decision to major in journalism. I think that this degree has taught me a lot, don’t get me wrong. But I also think that there are other things that I want to do. I think, at least right now, the most appealing option is working in some type of community center and working with outreach. I don’t think that reporting is something that I really want to do anymore, or if it ever really was. Really, I realized that the most important thing for me is to love what I am doing.”

Also, another graduating senior Alex Koon stated similarly:  “I will be moving on to graduate school at UW-Oshkosh to study Leadership, Literacy and Social Foundations. I will also be a graduate assistant serving in an Assistant Conference Coordinator role.”

What is your fondest memory that you will take with you from the community?

Kali Anditon: “I am really going to miss coming and sitting in the center every day and smiling, laughing, and putting joy into each other’s lives. My fondest memory is probably revolving around the things that IMPACT has achieved this year. We had an amazing turn out for our CookOUT at the beginning of the semester, as well as the painting of the rainbow crosswalk. We accomplished a clothing exchange for individuals seeking new gender affirming clothing, held a little silly birthday party for people who may not have accepting family, and we are looking to host a Trans Swim night during finals week. The fondest memory is the people, and not just a single moment.”

“I have had an insurmountable amount of beautiful memories from the Pride Center throughout the four years. I would say the one that currently stands out is the 2022 IMPACT Drag Show. After multiple years of having limited social interaction and as we were still dealing with the national pandemic, a night of light, music, and queer joy was had. Working with drag queens and my favorite people was a fun aspect of the night. Seeing the hundreds of people enjoy themselves and get to express themselves was the highlight. Anytime I got to laugh till my ribs hurt and see the smiles of my queer family was a memory that I will hold onto forever.”