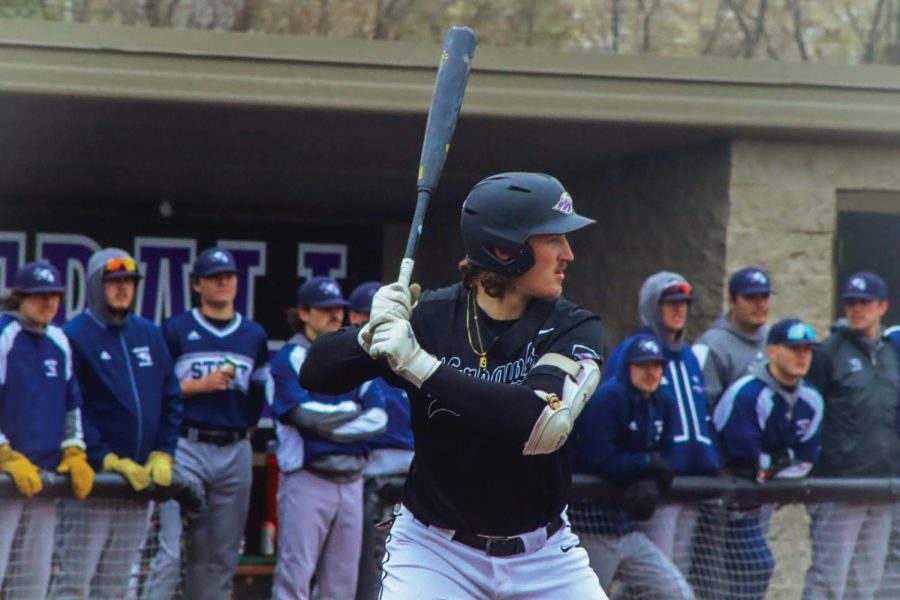 Junior outfielder Matt Korman (19) gets ready to hit the ball during the game against UW-Stout Sunday afternoon May 1, 2022.

The No. 9 UW-Whitewater baseball team (27-6, 19-3 WIAC) swept UW-Stevens Point in a double header Tuesday, April 26 and then another double header against UW-Stout Sunday, May 1. Sunday’s games were part of Alumni Day on Prucha Field at Jim Miller Stadium. With the wins the Warhawks extended their longest win streak of the season.

Whitewater beat Stevens Point on April 26, the double header was a reschedule from a previously rained out matchup. The 4-1 and 9-1 victories gave the Warhawks sole possession of the number one standing in the WIAC, putting them in the lead to host the WIAC conference tournament.

The Sunday matchups with Stout (15-17, 10-12 WIAC) got off to a rocky start for the Warhawks as their starting pitcher Westin Muir struggled to find his rhythm early. The Blue Devils scored first with an RBI double from Joel Thimsen in the third inning. Muir was able to shake off the run and get the win, he pitched seven innings in which he allowed four hits and one run; he finished with 11 strikeouts.

“I think great pitchers are determined not when they have their best stuff but what they do when they are not at 100 percent, either velocity-wise or feel-wise,” head coach John Vodenlich said. “He struggled today and he knows it. His fastball is a great pitch and he struggled to locate it today, but like I said, great pitchers are able to make adjustments and get us wins and that’s what he did. So I’m happy with how he performed and continued to grind out there.”

Stout was held hitless for the final two and two thirds innings of game one. The Warhawks won game one 7-1.

Before game two got underway, a number of Warhawk baseball alumni were honored on the field.

“I’m so happy to have them [here]. I think we had somewhere between 50 to 60 that came home for the event,” Vodenlich said. “Due to the weather changes and schedule changes we lost some. But overall probably over 60 alumni came home and ultimately that makes it for a really special weekend.”

Kade Lancour got the start in game two, he earned his seventh win of the season. He pitched eight innings, gave up three runs on six hits and struck out seven batters. The Warhawks never trailed in the game thanks to Zach Campbell opening the scoring in the second inning with a two run home run.

Stout was able to bring the game to within one run in the top of the fifth however Whitewater answered fast and scored four in their half of the fifth. The Warhawks got one more run in the eighth inning before Nick Rector came in to close out the game and secure the 8-3 victory.

With the wins, the Warhawks extend their win streak to 12 as they near the postseason, which will begin with the WIAC tournament that opens May 12. Whitewater hopes to stay hot as they near the games that decide the future of their season.

“Baseball is a streak game but ultimately whether it’s 11 or 12 we got to just be playing good baseball,” Vodenlich said. “We’re going to keep playing against the game and not our opponents because there’s plenty of things we can do to be in control of. Whether it is the quality of the at-bat or pitches we throw or being in the right position. So we are really just going to focus on us, not them and hopefully we can keep playing.”

Whitewater will finish the regular season in Platteville with one last four game series before the conference tournament and then hopefully the NCAA tournament.