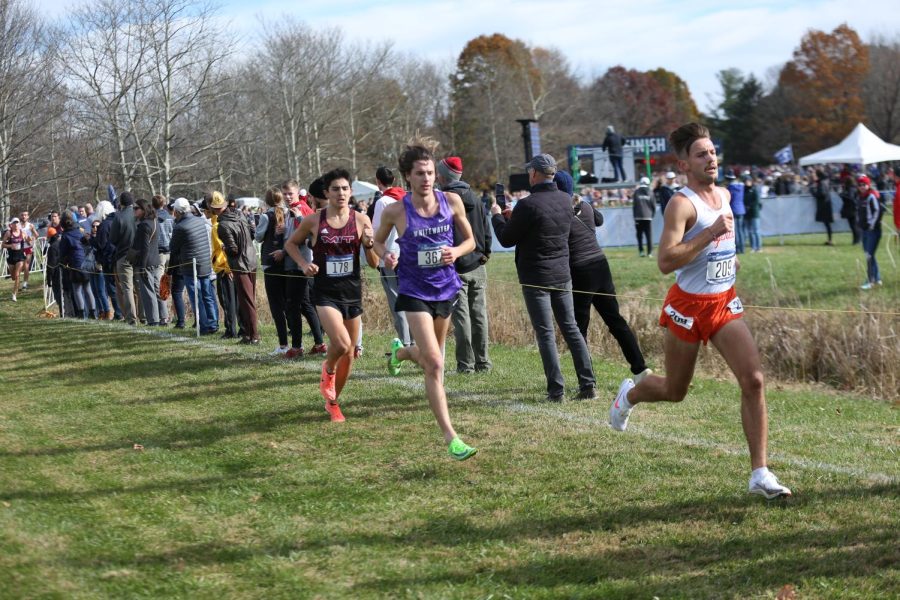 Gunner Schlender is entering his second year at UW-Whitewater and is looking to be more of a leader for the reputable men’s cross country team. Being at the front of a young crew that includes fourteen freshmen brings potential to the program, but without much experience it does provide some challenges.

“This year it’s more of an upperclassmen role, especially with all of the freshmen. Kind of have to adopt more of a mature and level-headed role, not that last year I wasn’t but this year having to be really cognisant about the influences that you are putting on people especially with so many young kids,” said Schlender.  “Just have to be really mature about it, almost business-like.”

It’s different courses, different competition, and different atmospheres in college cross country than that of high school cross country. That is something Schlender hopes to instill in the minds of the atypically young team, with the help of fellow sophomore, Christian Patzka.

“The biggest thing was the amount of depth. It was nice to have Christian too at the same age that we could kind of race together, and figure everything out together,” said Schlender. “Especially when we got to the postseason meets, it was the amount of bodies that were in races with a mile to go that was different from high school.”

The WIAC Newcomer of the Year is coming off of a personal record performance last year down in Louisville, KY during the NCAA Championship. However, he does not plan on being too hung up on that performance but wants to use the momentum into the 2022 season.

“A lot of it is momentum, having the confidence in yourself that last year was good but not dwelling on it. Understanding it, learning from it, and not letting it become who you are this year,” said Schlender. “We are obviously really proud about last year, but at the end of the day this year is a new year. We will take some of the momentum from last year, but we are not going to define ourselves by last year.”

The 2021 All-American was under the wing of cross country legend, David Fassbender, who graduated last year. Learning from the best brings out the best, and that’s exactly what happened during Schlender’s freshman year.

“With him [Fassbender] just learned to follow him around as best as possible. Pretty much if you were close to David, you knew you were doing something right,” said Schlender. “Learned how to work hard, what to do in workouts, and where to be in workouts. Carrying that into this year, I think Christian and I hope to be that piece for this team. Hope to be that leader in races and in workouts.”

The UW-Whitewater cross country course is one of the most difficult to run in the country. From the deceptively challenging footing to the change in elevation, Schlender believes that having that as a training capital brings advantages that may not be spotlighted to the naked eye.

“Kind of what we say to people who race our course is that if you can run what you want to run for working out on our course or racing, you can do it anywhere in the country,” said Schlender. “It’s that set-up, that we workout on the hardest parts of the course. We put a lot of focus into making sure a lot of effort is put into knowing our course.”

Nowadays, not taking what’s right in front of you for granted has been implemented into the mindsets of those all over the world. Schlender’s no different. Being a track star as well, the former WIAC Kwik Trip Athlete of the Week had his last two track seasons ripped away from him. He lost his junior year from a stress fracture in his foot, and his senior season was snatched from the likes of the COVID-19 pandemic, each running session is that much more important to him.

“That’s the one thing that has motivated me a lot after high school. I never wanted to feel that pain and disappointment again. That’s the one thing that really allows me to appreciate every day, the ins and outs, whether it’s cross country or track,” said Schlender. “Just being really grateful that I am able to run every day, compete for Whitewater, run with my teammates. There was a point in time where I was yearning to just run with people and to just run at all.”

Schlender was able to continue that fulfillment to kick off the 2022 season at the Alumni Intrasquad run at the Whitewater course. In which he believed went well and put the team and himself in a good spot to begin the intense and highly anticipated season.