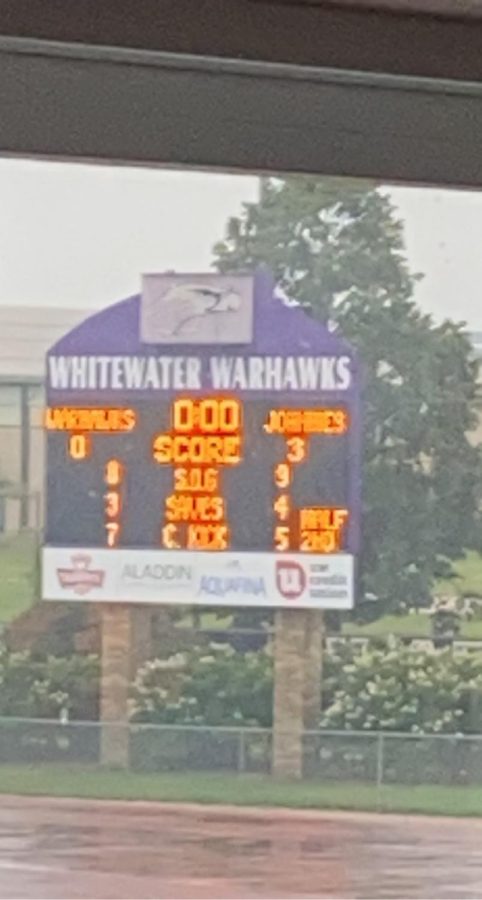 The UW-Whitewater men’s soccer team had their home opener at Fiskum Field in rain, and lots of it. Whitewater (3-2) lost to St. Johns (3-0-2) in a 3-0 contest. This was the first of a four game homestand for the Warhawks.

St. John’s had possession for most of the first half. The first shot on goal came for the Johnnies at 43:00 with a great save by Whitewater’s Jake King. St. John’s scored the first goal of the game just before the 35-minute mark before another save made by Jake King at the 33-minute mark.

Whitewater had their first shot on goal 15 minutes into the game by Jake Mouille, but to no avail as it was saved by St. John’s. Players keeping their footing proved to be a problem early on in the game.

“It’s impossible to use (weather) as an excuse because they have the same weather we have. There is no excuse, none at all,” Head Coach Tony Guinn said. “I actually thought the field held up very well based upon the weather and that’s a credit to Mike Miller, who oversees all the fields for athletics, who does a wonderful job, who is incredibly understaffed, but he does a wonderful job, and the field was perfect.”

Just inside 29:00 the Johnnies scored again on a shot right at the goalie box to give them a 2-0 lead over the Warhawks. One minute later, the Warhawks had two more scoring chances with shots on goal by Tucker Johns and again by Jake Mouille. It was more than rainy weather that contributed to the Warhawks loss.

“(St. Johns) had a game 18 hours ago. They played two games against two Wisconsin State Schools within 20 hours, and they didn’t lose either one of them,” Guinn said. “What does that tell you? That’s a tough group of kids.”

At halftime, the Warhawks trailed 2-0. The rain then started to fall a little harder and the team made a change at goal, pulling King who had two saves but gave up two goals and putting in Matthew Vollmer. Sophomore Nolan Ehlers had a shot on goal at 36:00, but it was saved by the Johnnies goalie.

The Warhawks were then down 3-0 with just 24-minutes to play in the game. With the ending insight, both teams started making substitutions.

“At that point, based upon our performance so far, I just felt the need to just give a lot of other players opportunities to get into the game and subbed out all 10 players and we didn’t get scored on the rest of the game,” Guinn said. “From a coach’s standpoint, I was just disappointed and embarrassed to be honest… It was humiliating… We are just a lot further away than I thought we were going to be and that’s disappointing.”