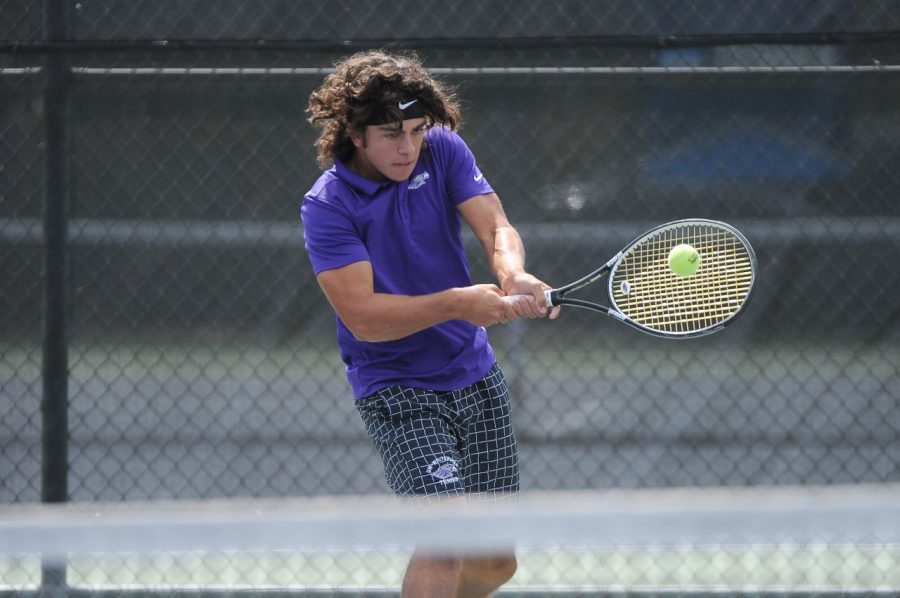 The UW-Whitewater men’s tennis team has been dominant for decades, the team has not finished with a losing record since the 2002-03 season, that is before the current freshmen on the team were born. Head Coach Frank Barnes was in his first season as the head coach when the team last finished with a sub-.500 record.

The 2022-23 team is headlined by two Division I transfers, as well as a number of high talent freshmen, not to mention the upperclassmen on the team who are looking to have their best personal seasons yet.

The Warhawks top players include senior John Zakowski who is in his second year at Whitewater after transferring from Division I University of Denver, and junior Luke VanDonslear who just arrived as a transfer from Northern Illinois University, another Division I school.

Zakowski is not only a high quality player, but also a well established leader on the team.

“He shows our guys a proper way to take a solid approach of committing to tournaments and training. He’s always on the ball machine whenever he feels he needs to improve on something, he’s a self motivated leader which is nice to have on the team,” Barnes said.

There are also some strong young players on the team, including freshman Tyler Nelson, from Waunakee, WI. Nelson was ranked in the top nine in the WIAA State singles tournament every year of his high school career. Coincidentally, in Nelson’s freshman year of high school, Zakowski won the state title.

“Tyler Nelson is a strong incoming freshman, he was the one seed at the [WIAA] State tournament, he placed third so we know he’ll be a good addition,” Barnes said.

“I’m just trying to have as much success as possible, play a lot of matches, see what I can do,” Nelson said.

Whitewater started out their season with the Warhawk Fall Invitational Friday Sept. 9 and Saturday Sept. 10. The team hosted a number of teams with scholarship players, as a member of Division III, UWW does not provide athletic scholarships. Despite this, the Warhawks took the title in four of the nine flights at the invite and lost a tight match in the one doubles championship match.

“We got eight of our 11 guys won their first match, made it through to the main draw side,” Barnes said. “We won at the two flight, the three flight and the six flight, against good competition.”

Nelson was the winner of the three singles flights; he only dropped one set throughout his three matches of the tournament.

“It was a lot of fun, obviously the competition was really good,” Nelson said. “Had a lot of fun and the team did really well as well.”

The three doubles flight was also won by Warhawks. According to Barnes it is “about as well as we’ve done” at the annual invite. The winning results against such difficult competition is a great sign for the team as they begin the season.
“That shows us we’re looking pretty good, especially at the top having those D-I transfers and Cole Lindwall, he’s been really good for us, so they’re leading the top,” Barnes said.

Lindwall, whose younger brother Chase now joins the team as a freshman, is a senior who advanced to the Intercollegiate Tennis Association (ITA) Cup last year in singles. The ITA is one of the big events on the schedule, which could see the addition of a few matches in the spring portion of the season.

“The ITA, is the one that’s in the fall, that’s the big one,” Barnes said. “Chance to go All-American like we did last year. Go to the ITA Championship, both Johnny and Cole did that last year so they both want to get back.”

The team looks to keep their standard of winning well protected as they continue their year-round season with the ITA Regionals Sept. 30 through Oct. 3 in St Peter, MN. Unlike most other Warhawk sports, the men’s tennis team competes in the New Jersey Athletic Conference (NJAC). The Warhawks competed for and won their first NJAC title last year, a title they hope to defend in the spring.